This post will be a round up of what has been happening on the intelligent heating project.

In my last post I detailed how we had encountered a problem printing an object on the MakerBot and how this had resulted in some slight damage to the build plate.

Thankfully the damage wasn’t critical. This week we were able to re-cover the build plate with the film (which is a real awkward task and takes a couple of attempts to get right) and start printing object again!

The picture below shows the MakerBot back in action:

Now that the printer is back in action I did some research online for Raspberry PI cases. The thingiverse website has a selection of RPI cases however I found one in particular that matched my requirements, as it came with a mounting bracket for screwing the case to the wall.

Since my RPI will be sitting inside a small closet where our electrical box is located, this seemed perfect.

You can see the case here:

I downloaded the STL files and then loaded them into ReplicatorG. First of all I built the Gcode for the base section of the case, and then exported to flash card format.

I now encountered a small problem, the case wasn’t visible on the flash card via the MakerBot menu. I’m not immediately sure what happened here, so I’ll be trying a fresh export on Monday and will try reloading it. Providing this works, then the first version of the case will be printed next week.

I’ll be photoing and uploading the results to the blog.

At the end of the month I plan on ordering some components for the Arduino from Adafruit, this will consist of a temperature sensor and a touch screen for the thermostat. I’ve not settled on which products I’m going with yet, but once this is decided I’ll be adding a post to the Thermostat thread details the specs and costs.

Of course in order to attach the components to the Arduino it helps to have a soldering iron. So today I picked one up from Home Depot. It cost around $15 and some extra electrical solder was around $9: 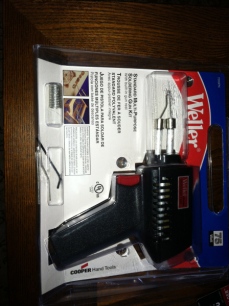 So I am now all set to start connecting up the components for my Arduino thermostat.

In my earlier blog I had mentioned my plan to install HTSQL on the RPI. I have still not gotten around to doing this as a result of the equipment I am missing. I will need a cable to connect the video out up to a spare monitor  I have ready. My other option is of course to buy another monitor with a HDMI output on it. However I have had some problems with HDMI jack not working on the RPI so I will need to investigate this further.

So the above details where the project is currently at. Expect further updates over the week.

One thought on “Raspberry PI case, soldering irons and other such matters”